Ladywood schoolgirl, Christina Edkins, who was killed in a knife attack on a bus on Hagley Road was remembered at the NIA.
An event held at their Sports and Leisure Centre, organised with Sport4Life and friends of Christina Edkins raised over £400 for her memorial fund and anti- knife crime work.
Meanwhile TNT spoke to Government Justice Minister, Damian Green MP, who called the murder ‘tragic’ and he praised the efforts of police, government and local groups over their determination to fight crime. 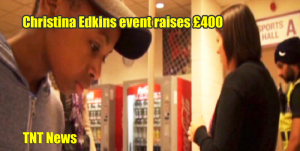