The Coffin Works, on the edge of the Jewellery Quarter, a building which is being turned into a museum, is to be featured in a television documentary on BBC1 called Restoring England’s Heritage.
It is to be broadcast on BBC1 on Thursday 5 December 2013 at 7.30 pm.
TNT News met the presenter of the programme, the impressionist, Alistair McGowan. 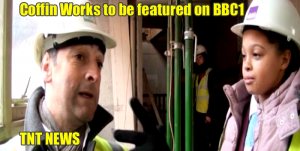