Adopted Brummie, sixteen year old Malala Yousafzai, who was shot for her efforts to promote education in Pakistan, and treated for her injuries in Birmingham, was given the honour of opening the new Library of Birmingham in September 2013. 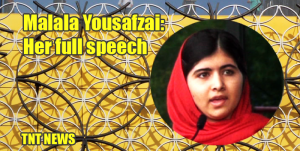 Her speech was so well received that we have decided to replay the whole speech here so that viewers around the world can hear what she had to say… ‘Pens and books are the weapons that defeat terrorism’.