One of the Metro trams has been painted in the colours of what was once known as Birmingham City Transport.
It is 100 years since the cobalt blue and primrose yellow colour was first used. Older viewers will recall buses and old style trams were once all painted this colour.
The tram is named Theresa Stewart, after a former Lord Mayor of Birmingham.
She unveiled the repainted tram in August 2013. 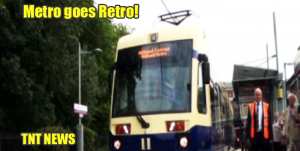