Generation Ladywood is a major musical project which was held at Symphony Hall in June 2013.
The choirs and musicians from ten local primary schools took part in the event which raised the profile of schools in the area and helped foster links between the schools and Town Halll/Symphony Hall.
This is a five minute summary of some of the performers in action. It is introduced by CBBC presenter, Barney Harwood. 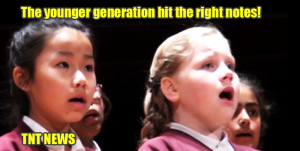