Diana, The Princess of Wales, officially re-opened Victoria Square in May 1993. It was the end of a major redevelopment of the area that TNT followed from the start.
We filmed the construction of the ‘Floozie in the Jacuzzi’, the renovation of the statue of Queen Victoria and look out for a dog called.Ebony. 20 years on and Robin Blake, TNT’s reporter, is now a director at ITV News! 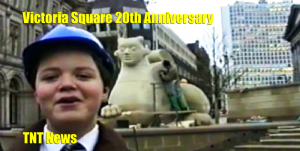